The measured silver contents of 194 Parthian drachms are displayed on the enclosed graph, sorted by the approximate year of the coinage. Unlike the graphs in other folders where the %Ag+Au from streak analyses are used, the % silver values in this graph are from the low-neutron-intensity Howitzer measurements since there were more data available for these measurements.

In general, there is a gradual decrease in the average silver content throughout the Parthian period.

In 1949, Prof. Earle Caley described his rigorous destructive chemical analyses of 14 Parthian drachms. Six of those drachms were from the period: 57-37 BC (now attributed to Orodes ii). These six coins had silver contents ranging from a high of 69.8% down to 41.8%. Prof Caley argues convincingly that this marked debasement was a natural outcome of the stresses of war that occurred during his reign.

Our data differ from those of Prof. Caley in that we do not see that extensive a degree of debasement. There are a few possible explanations. The coins we analyzed came primarily from two groups: the American Numismatic Society and a collection donated to Princeton University in the early 1900s. In both cases there may have been a self-selection of the “better-looking”, hence higher fineness coins. The six coins Prof. Caley analyzed were given to him for destructive analysis by the curator of special collections at Princeton University and were part of a hoard of 600 Parthian coins dug up in 1923. Although there is no way of proving it today, we could speculate that the particular six coins provided to Prof. Caley were the less or least desirable coins (hence lowest fineness) in that hoard.

We have other data for 96 coins of Orodes II that we also analyzed. These were part of a group of 186 coins which belong to David Sellwood that we sampled in London. These 180 coins include the 96 coins of Orodes II. They average 89% silver+gold by the streak method of analysis and only about 10% (11 of the 96) showed less than 80% Ag+Au. Again, the lack of a large number of low silver coins in this grouping may be due to the selection of better specimens in the Sellwood collection.

In summary, there probably was some degree of debasement during the reign of Orodes II, but this is not much in evidence in the coins found in typical collections.

The same is the case with the coinage of Shapur I. Museum and private collections have very few low-fineness coins of Shapur-I. Although you will see low-silver data on the Sasanian summary sheet, these are not for coins in the typical collection. In fact, almost all of these were coins bought from coin dealers in Tehran in 1970, who were very happy to sell the very-debased looking coins they had which no one else wanted. 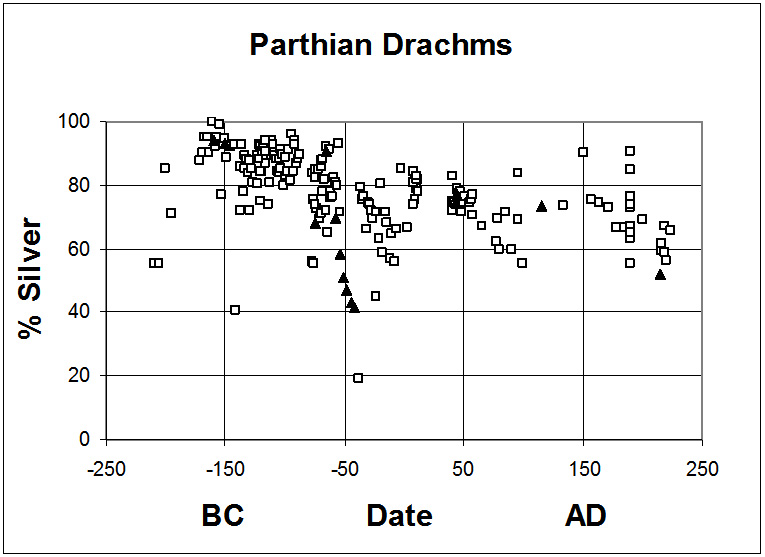 Data are based on Howitzer % silver measurements. For each monarch, data points were randomly distributed over the years of his reign.

Chemical analysis data of Caley for 14 Parthian coins are shown as solid triangles. Refer to the article by Caley that is included in this folder and read the comments in the READ THIS notice.

Note: AAG coins will be donated to U. Michigan Kelsey Museum