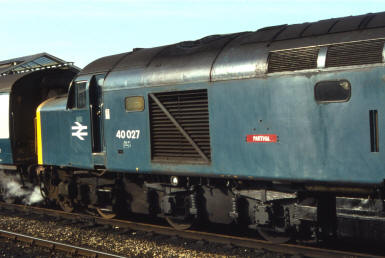 40027 on a passenger working. It carries a painted version of its name 'Parthia'.
It has disk headcode but it's nose end doors have been removed.
Ashton Junction, Manchester, 9th June 1982. Photo credit: Colin Baker

English Electric 'Type 4' 1C0-C01 (later known as Class 40's) was introduced in 1958 as part of the modernization plan, equipped with a steam heating boiler and weighing 133 tons. There were 200 built, originally numbered D200 - D399 before being classified as TOPS Class 40 in the 1970's, losing their original green livery (and character!) in the process.

Locomotive 40027 was originally D224 and was built at the Vulcan Foundry in Newton-le-Willows, Lancashire entering traffic in August 1959, allocated to Longsight MPD. Twenty five class 40’s carried the names of famous ocean going liners on cast brass plates and D227 was named Parthia. These nameplates began to be removed by BR during the 1970’s, as the class 40’s were no longer considered as front line passenger engines and they were also attracting unwanted interest from "collectors". Withdrawal came on the 24th April 1983 (over four years since its last classified repair at Crewe works in November 1978) due to the main generator failure and it was broken up at Crewe works in April 1984.

Click here for an excellent view of 40027 by Andy Hoare taken at Reddish on 17th July 1982. The original nameplate is long gone by this time but this loco received a painted alternative in later years.

Sheffield Railwayana Auctions 12th June 2010
Lot 424. BR FLAMECUT PAINTED NAMEPLATE: “PARTHIA” from the Type 4 1Co-Co1 Class 40 loco D227, later 40027. New to 9A Longsight in August 1959, works number EE/VF 2683/D444, it was named in June 1962. The cast plates were removed during 1972, and depot staff painted in the names. The loco was withdrawn in April 1983 from LO Longsight and cut up at Crewe Works in September 1984. 30” x 17” the name painted in white on a red background at the place where the nameplate would have been carried. In fact all the bolts which held the nameplate are still in-situ. Edges nicely trimmed and in ex-loco condition otherwise. Realized £190.