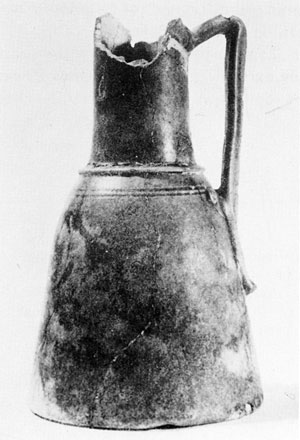 Green-glazed pitcher from Seleucia
In the Torino Municipal Museum of Art
"Seleucia, in particular, was a Hellenistic city built on the banks of the Tigris River. It was subjugated by Parthia from around 142 B.C. to A.D. 43. The excavations sponsored by the University of Michigan before the war, from 1929 to 1932, resulted in the discovery of numerous relics from the third stratum including a slipper-shaped sarcophagus and a ceramic sarcophagus33 Also, an ongoing excavation by an Italian team that began in 196434 unearthed numerous green-glazed ceramic pieces, starting with the green glazed pitcher in figure 38."
- Shinji Fukai, Ceramics of Ancient Persia (New York: Weatherhill, 1981), p. 33, figure 38
- Mesopotamia II, fig. 14