Coins of Parthia before Arsaces

Achaemenid and Seleucid Satraps of Parthia 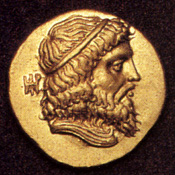 There were two rulers of Parthia named Andragoras mentioned by Justin, one of them Alexander the Great's satrap of Parthia (xii. 4. 12) and the second the governor of Parthia who was crushed by Arsaces I (xli. 4. 7) in the mid-third century. Supporting their existence are a few coins struck in the name of Andragoras, from an uncertain eastern mint sometime between ca. 320 and 240 B.C. It has not been determined to which Andragoras these coins belong.

Mitchiner has argued that Arian's more complete account of Alexander's reign fails to mention a satrap of this name in either Parthia or Media, though he could represent a high military or supervisory official serving alongside the satrap, perhaps confused with the satrap himself by Justin.

There are only four documented gold staters of Andragoras. The first of these pieces entered the British Museum at the same time as the first tetradrachm, both said to be from the Oxus Treasure. A second stater, from the Cunningham collection also appears in the BM. The third stater is in the Berlin cabinet. The fourth stater is in private hands and was sold at auction by Numismatic Fine Arts in November, 1990. A fifth was reported to be circulating for sale in London in March 2004.

Coins in the Name of Andragoras