Click here to see index of Parthia in the News articles from all years. 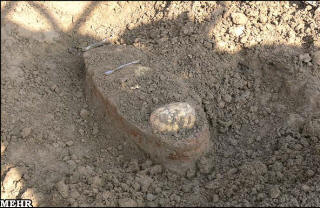 A team of archaeologists has stumbled upon an ancient coffin bearing a skeleton of a child buried in a Parthian mound in Khuzestan Province, southwestern Iran.

The team, which had previously been assigned to demarcate the site, found the coffin in mid December after the recent heavy rainfall removed the earth from the coffin, Khuzestan Cultural Heritage Enthusiasts Society (Taryana) spokesman Mojtaba Gahestuni told the Persian service of the Mehr News Agency on Saturday.

An intact pottery jar and several other artifacts were also buried along with the child in the coffin, he added.

The report did not specify the material used in making the coffin, however it did clarify that the casket along with its contents have been transferred to a governmental organization in the province.

The archaeological team led by Mohsen Hosseini also discovered many intact pieces of pottery and a large number of shards at the mound, leading them to surmise that most likely, there was a large pottery workshop at the site during the Parthian era.

Illegal excavations and farming are currently threatening the ancient sites in the region.

The team has identified traces of illegal excavations on the mound and other ancient sites nearby.

In addition, agricultural activities by the local residents have caused serious damage to some of the ancient sites over the past few decades.

Photo: A part of a skull, which is believed to belong to an ancient child, is seen in the coffin found at a Parthian era site in Iran’s Khuzestan Province in mid December.